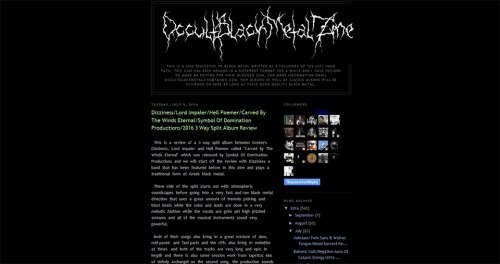 1. Can you give us an update on what is going on with the band these days?
Tragon: We are currently finishing the recording of our second full length album “In Full Regalia” and also working on new songs for a split release in 2017 and a third album.

2. Currently you are working on a new album, how would you describe the musical sound that is presented on the recording and also how does it differ from the stuff you have released in the past?
Tragon: “Admire The Cosmos Black” was an album we hadn’t planned and contained songs from different eras of the band. This time we had a more clear vision and there was only one main composer, which makes the songs more cohesive and homogenous. We also went a little more aggressive, there are songs in the new album that offer more time to headbang than what we used to have in the past.

3. Your lyrics cover some Ancient Hellenic Pride and Anti Christian themes, can you tell us a little bit more about your interest in those topics?
Tragon: These are only some of the subjects that generally interest me and I spend time studying. The band is my preferred channel to speak about those specific issues. We are an anti-religious band, and since we happen to live in a Christian country our lyrics are antichristian. When I am not touching this subject, I either speak of the Ancient Greek world (we were always fascinated from the Greek mythology, and to be honest with you, I would personally prefer the “official” religion of Greece, if there has to be one, to be the ethnic mythos of Greece instead of the ethnic mythos of Judea that currently is) or the history of Vlad Tepes a.k.a. the “Dracula”.

4. I know that the band was named after ‘Vlad Tepes’, can you tell us a little bit more about your interest in this historical character?
Tragon: When we started the band we were fascinated by the stories around Vlad, both the historic one, as well as the fictitious “Dracula” of Bram Stoker. Who doesn’t like brutal heroes who impale their enemies and vampire stories, right? Above all, the title “Lord Impaler” felt really fitting for a black metal band and this was the deciding factor…

5. What are some of the best shows that the band has played over the years and also how would you describe your stage performance?
Tragon: Lord Impaler have only played live 3 times, the last one was 2 months ago, and the one before that was 16 years ago. Our latest show, supporting Rotting Christ, was certainly the best we have given, a traditional black metal show with blood, corpse paint and a great atmosphere.

6. Do you have any touring or show plans for the future?
Tragon: We are in the talks for some shows in November but we don’t have any dates booked right now. We keep our ears open for opportunities to play more shows.

7. Recently you where a part of a split with ‘Dizziness’ and ‘Hell Poemer’, what are your thoughts on the other bands that had participated on the album?
Tragon: They are both an excellent sample of Greek black metal. Each one has developed their own brand, Dizziness are closer to the primitive Hellenic Pagan black (alongside cult bands like Nergal and Athos), while Hell Poemer are closer to the classic Greek black metal sound but expand on it in modern ways. Worth checking their other works.

8. Also on the split you had done a cover of Bathory’s “Call From the Grave”, what was the decision behind doing your own version of this song?
Tragon: Whenever we do a cover we are picking on songs that we would have done differently. We don’t really see the point in re-making a song of a band that plays similar music with us and just performing their song as it is. With “Call…” we felt we could really make it shine in our style and so we went for it.

9. On a worldwide level how has the feedback been to your current music by fans of black metal?
Tragon: People around the globe seem to genuinely enjoy our music. We’ve got a lot of positive feedback and it’s only getting better over the years. Of course there has been the occasional bad review every now and then, which we welcome and appreciate (that’s how you learn you need to improve usually), and it mostly boils down to “we’re not original enough”, which I am fine with: we never tried to innovate much, we’re playing the music we like to listen to. There are bands like Virus or Dødheimsgård who try to re-invent themselves every album. We are not this kind of band.

10. When will the new album be released?
Tragon: I really cannot give you an estimate. We hope to finish it in 2016, but even if all go as planned, it will then depend on any labels that may express interest in it. Generally, we hope for a release this year.

11. What are some of the bands or musical styles that have had an influence on your newer music and also what are you listening to nowadays?
Tragon: We have always been fans of Norwegian and Swedish black metal, and it shows. This isn’t something we try to do, it has become a personal style of composing (as far as I can tell at least, from working closely with Lord Nebulah, our main composer). Bands that shaped us, hmm, I will say Emperor, Immortal, Dark Funeral, Marduk, Satyricon, but again influences aren’t something we consciously choose, and we’re listening to lots of different stuff that might have crept in our minds in some way. Currently I am listening to Behexen’s latest album and recently added Imperium Infernalis’ “Imago Dei” on rotation. This last one is another excellent sample of contemporary Greek black metal.

12. How would you describe your views on Occultism?
Tragon: I am living in the age of logic, which means no gods, no devils, no fairies. However I do find occult theories somewhat fascinating and when I have time to spare I do read occult books. Whenever I reference anything religious in my lyrics, they mask something deeper, they are just a symbolic link to what I really want to talk about. For example, Satan is the rebellious free man, I am not a Satanist, but you will see him mentioned A LOT in our third album…

13. Before we wrap up this interview, do you have any final words or thoughts?
Tragon: Firstly, I would like to point everyone to our official Bandcamp page at http://lordimpaler.bandcamp.com where you can listen to our entire discography. We recently uploaded a compilation named “Demology – The Decade of Obscurity”, which is free to get and covers our first decade, our demo era. Secondly, a word to all metal fans: SUPPORT YOUR LOCAL SCENE. Going to a local concert, buying a DIY product, getting the word out, it makes all the difference in the world. Give the underground bands the time to stand on their feet for when the dinosaurs die off. Last (but certainly not least), thank you for this interview. We greatly appreciate the time and effort you put into it. ΧΑΙΡΕ!